“The [Pony Express] men were faithful, daring fellows, and their service was full of novelty and adventure. The facility and energy with which they journeyed was a marvel.”

Majors is often credited as being one of the commercial founders of Kansas City. His company created such a demand for oxen and cattle that it helped fuel the establishment of the Kansas City stockyards and livestock exchange. His ventures also allowed for a swift transfer of goods and information across the western United States at a time of great transition, as the United States grew to span the breadth of the North American continent.

Alexander Majors came from a long line of farmers. But by 1845, his wife Katherine had given birth to six children, four of them girls. Majors wanted to educate his daughters and bring them up as upper-class women, which he believed he could not do with farming income alone. Based on his experience handling animals, he believed that he could make money in the freighting business – and he was eager to take advantage of the new trade opportunities opened up by the annexation of vast territory after the Mexican-American War. He purchased six wagons and teams of oxen, and began freighting goods over the western trails. He quickly gained the reputation of being an efficient freighter and competent businessman. 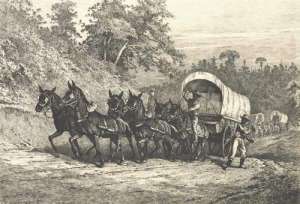 By 1855, Majors’ freighting business was so successful that he partnered with William Russell and William Waddell, two of his former competitors. Their firm Russell, Majors & Waddell grew to include 3,500 wagons and 40,000 oxen. By 1857, the men had a virtual monopoly on all government freighting west of the Mississippi River.

Majors had a hands-on role in the freighting company, managing the employees and the wagon trains. He was a religious man, which informed the way he ran his business. Majors required that his employees take an oath promising not to drink, swear, treat animals cruelly or behave in any way “unbecoming to a gentleman.” He also gave all his employees a copy of the Bible, and enforced a day of rest on Sundays at a time when many freighters did not observe a weekend. Majors may have been interested in the morality of his men, but he also realized that sober, well-mannered, and rested men would make for more productive workers.

The successes of Majors and his partners were deeply entwined with their slaveholding status, and their firm was known for a pro-slavery position during the Border Wars period. Russell, Majors, & Waddell likely relied heavily on slave labor in their businesses, and they had a personal and professional interest in making slavery legal in Kansas. The men, particularly Russell, used their influence in the community to assist the pro-slavery cause – warehousing goods for pro-slavery “border ruffians,” engaging in land speculation in Kansas, and firing Free State employees in favor of “hiring” slaves. However, Majors was also a Unionist and required his employees to swear loyalty to the Union during the Civil War.

In the late 1850s, the firm bought out a stage coach company started by William Russell, which became the Central Overland California & Pike’s Peak Company. The infrastructure of the coach line became the basis for the Pony Express. In 1860, Russell, Majors, & Waddell received a government contract to operate the Pony Express, answering a need for a fast mail service to the West. The mail route ran from St. Joseph, Missouri to Sacramento, California.

Ultimately, the Pony Express only lasted about 18 months. Advances in technology, such as the telegraph and the transcontinental railroad, put the Pony Express out of business.  Russell, Majors, & Waddell went bankrupt shortly thereafter.